Transport to remote island communities in the UK was debated in the House of Lords recently, with a particular focus on the issues with transport to and from the Isles of Scilly. 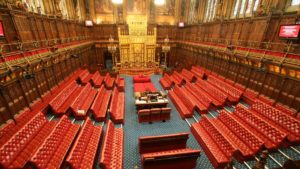 The debate on 20th July saw widespread condemnation of the judicial review into Penzance Heliport currently being pursued by the Isles of Scilly Steamship Company.

Lord Berkeley set the tone of the debate, commenting: “If you ask any islander what is the biggest challenge they face on Scilly, their answer is transport to and from the mainland.”

“Woe betide anyone who tries to compete”

Lord Berkeley – who lives on Bryher and is a former Labour transport spokesman – went on to describe the impact of freight costs, resilience and travel capacity on the community. He also lamented the position of the Isles of Scilly Steamship Company as sole provider of freight and passenger transport to the islands.

Lord Berkeley said: “A new service is planned with a new heliport in Penzance, but the planning permission for that has been challenged by a judicial review by the Steamship Company.

“The company denies that it is a monopoly, saying it is just a sole operator, which is an interesting definition of the words. It says that anyone else can start a service. But woe betide anyone who tries – they will get a judicial review thrown at them, on the most spurious grounds, in my view.”

Turning to the issue of transport resilience, Lord Berkeley praised the reliability of the Scillonian passenger ferry but bemoaned the “frequent” cancellation of flights, stating that in winter some 49% of flying hours from Land’s End Airport are disrupted.

This disruption, claimed Lord Berkeley, led to stress for patients travelling to medical appointments and means additional travelling time must be factored in for those attending meetings or going on holiday.

Lord Berkeley quoted an island businessman whop stated: “The current service is not fit for purpose and the islands are losing business as a result.”

Frontline staff were praised for their work, but Lord Berkeley claimed they are “often let down not only by the weather, but by the management.”

Lord Berkeley called for competition in the market, reduction in fares for islanders, and a subsidy for a winter passenger ship service.

Lord Teverson, who chaired a transport conference on the Isles of Scilly last autumn, commented how he had been struck by “how much the transport facilities and access to Scilly…needed to be improved, and by their unsatisfactory nature.”

He continued: “It was a great disappointment to me – having supported development and planning permission for a new heliport very near to the old one, to which there were very few local objections – that there was a judicial review to hold up the process. That meant the aspiration of people not just in Scilly but in west Cornwall to…greatly improve transport connections has been put back and potentially challenged.”

Lord Teverson echoed Lord Berkeley’s calls for greater competition to challenge the current transport “monopoly” to the islands, whilst numerous Lords called for the Competition and Markets Authority to investigate.

Lord Cameron of Dillington said: “The population [of Scilly] is at the mercy of one company that virtually controls all entry and exit for not only people but also goods… It makes any business, especially the tourist business, uncompetitive.”

Baroness Randerson, the present Liberal Democrat Lords transport spokesperson, added: “The attempts to delay the reintroduction of the helicopter service, highlighted by several speakers today, reveal the true situation of the ferry service – it is an attempt to maintain an effective monopoly.”

In summing up, Lord Berkeley commented: “All noble Lords who spoke about the Isles of Scilly said that there is effectively a failure of the present market, given that the service is pretty awful and is getting worse, and expressed concerns about the future of the islands unless something is done about that.”

“For the Benefit of All”

Cornwall Council granted unanimous planning consent for a new Penzance Heliport in February 2017. The project gained the greatest volume of support the council has ever received for a planning application.

A string of legal attacks – including a judicial review – have since been launched by the Isles of Scilly Steamship Company, which currently operates all air and sea transport to the islands.

A petition – launched by an island resident and businesswoman and calling on the Company to drop the judicial review – has received over 8,000 signatures.

Robert Dorrien-Smith, who is behind the project to reinstate the helicopter, said: “My intention remains to strengthen the transport system to these islands for the benefit of all.

“Ultimately we have got to put islanders and customers first and we must try to design a transport system that is best for everybody.”

The full transcript of the Debate can be viewed on the UK Parliament website.