Penzance Heliport Appeal Thrown Out by Secretary of State 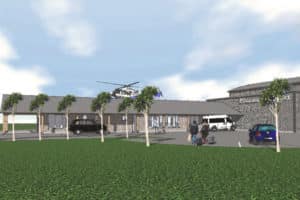 An anonymous appeal against Cornwall Council’s decision to grant planning permission for a replacement Penzance Heliport has been thrown out by the Secretary of State.

Cornwall Council’s Strategic Planning Committee unanimously passed the application on 2nd February but prior to the decision an anonymous request was made for the Secretary of State to ‘call in’ the application.

Robert Dorrien-Smith, who is spearheading the project to reinstate the helicopter link to the islands, said the Secretary of State’s decision was the right one.

Mr Dorrien-Smith said: “The Secretary of State has sent a clear message that this is a logical, sensitive and comprehensive planning application that has important benefits to the local community and economy.

“In effect the anonymous objector was questioning Cornwall Council’s judgement, knowledge and very ability to determine an important infrastructure project within its jurisdiction, showing a remarkable degree of arrogance and self-interest.

“We have believed all along that there was no justification for the application to be called in. Today’s decision confirms that and we now look forward to getting on with this important project for the Isles of Scilly, Penzance and Cornwall.”