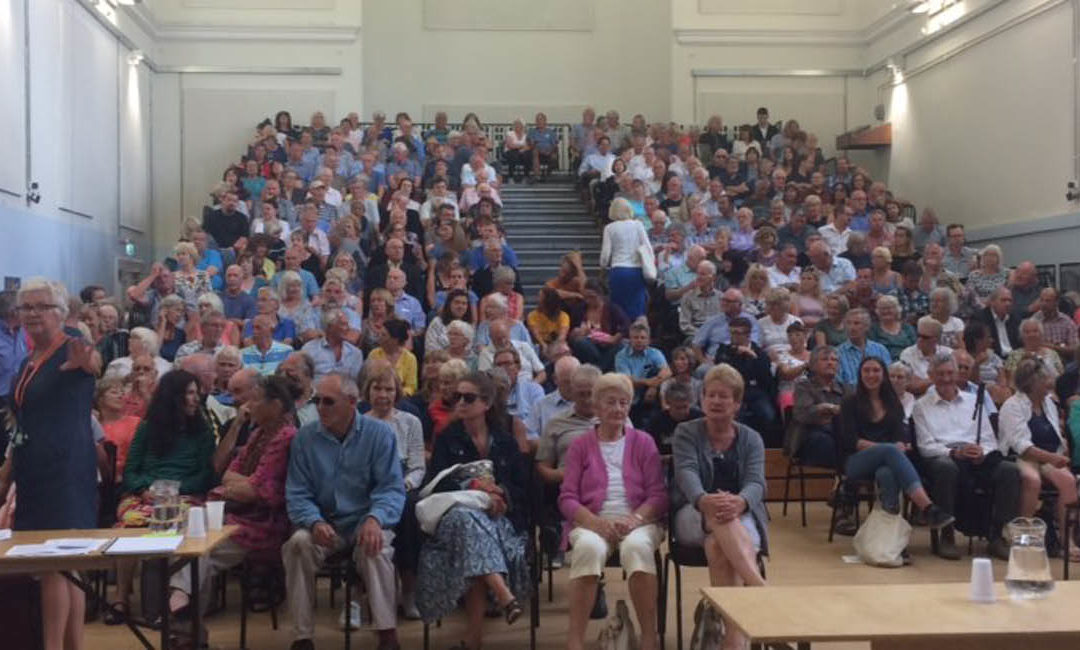 A public meeting in Penzance to debate the proposed new heliport to serve the Isles of Scilly saw the majority speak in favour of the planning application.

In a debate which heard strong feelings from both sides, 44 speakers supported Penzance Heliport for its importance to the Penzance economy and the social and economic wellbeing of the Isles of Scilly. As well as islanders and West Cornwall residents, support came from groups including Penzance Town Council, the Council of the Isles of Scilly, Penzance Business Improvement District, the Islands’ Partnership tourism body, Penzance and District Tourism Association and Friends of Isles of Scilly Transport all spoke in favour of the proposed development.

27 speakers raised concerns about the project, including four Isles of Scilly Steamship Company staff. The remainder of speakers remained neutral.

The meeting was called by Cornwall Council to ensure the views of local people could be heard. No decision was made at the meeting; the council’s Strategic Planning Committee will make their decision on 2nd August.

Despite the location, a number of island residents attended the meeting to support the project and expressed the strong social and economic case for the project.

Robert Francis, Chair of the Council of the Isles of Scilly, spoke of the important social need for a helicopter service from Penzance: “The Council of the Isles of Scilly fully endorses the planning application for Penzance Heliport. The Council realises a thriving island community requires an excellent transport infrastructure and is focused on promoting transport that is reliable, resilient and integrated. Our community is without a transport provision that is fit for purpose. We thank the people here for your support. You have the opportunity to watch the islands struggle, or you can help us and benefit from our future.”

David Jackson, Executive Director of the Islands’ Partnership tourism body which represents around 300 island businesses made the economic case for Penzance Heliport to proceed: “We simply cannot grow the market, extend the season and provide sufficient capacity, resilience and choice without further significant investment in our transport infrastructure. Speaking as the leadership body for tourism on the islands, we feel it is vital for the islands and the whole of Cornwall that we find a way to incorporate Penzance Heliport as part of an integrated transport system that can unlock the growth potential of the islands and Penzance.”

Marian Berkeley, a local resident and co-ordinator of the Friends of Isles of Scilly Transport group, represented the views of islanders: “A recent independent survey showed beyond doubt there is massive support for Penzance Heliport on the islands, with over 500 people in support, compared to just 7 in favour of the position of the Steamship Company. Last winter 29% of flying days were disrupted or delayed. You cannot imagine the impact that has on islanders waiting to travel, possibly for chemotherapy, possibly for social occasions. It is extremely distressing. Last year, I married in London. I waited five days for my flight off the islands and in the end, to get to my own wedding, I had to go on the freight ship.”

The importance of the project to the economy of Penzance was confirmed by the town’s Mayor as well as representatives of the Business Improvement District and the Penzance and District Tourism Association.

Nick Hood, Chair of Penzance Business Improvement District, said: “We fully support the heliport and recognise the importance of the project to Penzance and the Isles of Scilly. We believe it is in the interests of both communities to have a reliable service that offers residents and holidaymakers and alternative transport method between the mainland and the islands.”

Fran Brint, who owns a Penzance guesthouse and is secretary of the Penzance and District Tourism Association, said the organisation fully supports the heliport plans, adding the closure of the previous heliport had affected visitor numbers in Penzance. Mrs Brint continued: “We look forward to working together with the Islands’ Partnership tourism association and all transport providers to build the tourism market in both Penzance and the Isles of Scilly.”

A number of environmental concerns were raised during the meeting, all of which have been addressed in information previously submitted to Cornwall Council’s Strategic Planning Committee.

However, Penzance Heliport welcomes the opportunity to proactively engage with the local community as we move forward with the project, to mitigate the impact of this replacement heliport. To this end, Penzance Heliport has requested Cornwall Council include the setting up of a Local Stakeholders Group as part of any planning consent granted.

The decision on the Penzance Heliport planning application is expected to be made at Cornwall Council’s Strategic Planning Committee meeting on 2nd August.