Response to ‘Stop the Chop’ Campaign Claims on Penzance Heliport 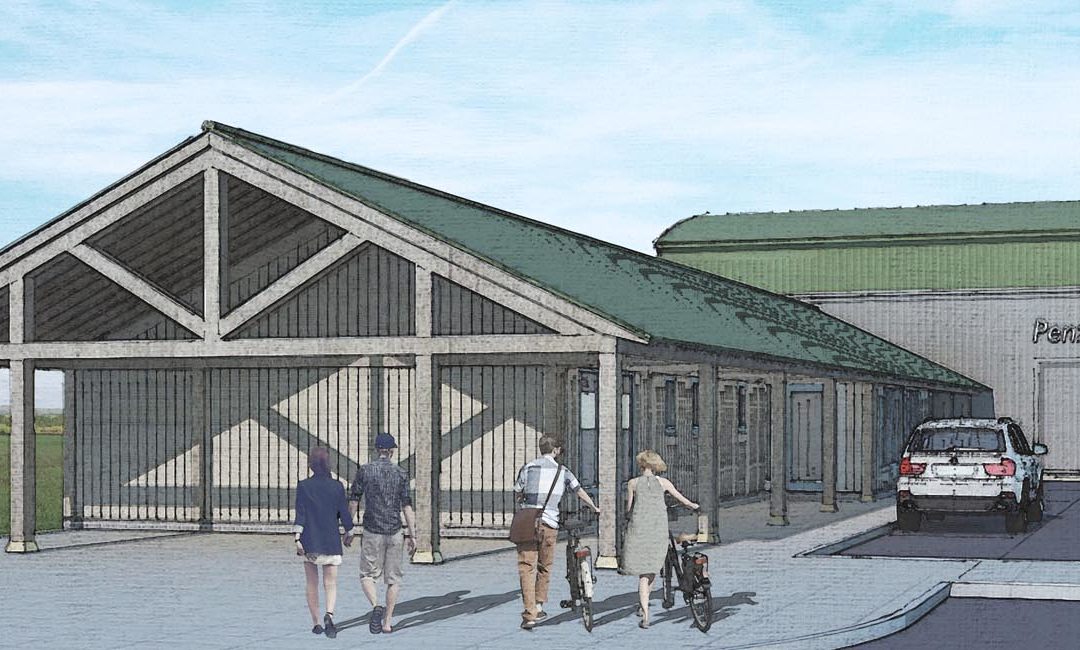 Penzance Heliport has responded to the misleading claims made by the campaign group ‘Stop the Chop Penzance’. The group has distributed thousands of leaflets around the Penzance area containing inaccurate and disingenuous claims intended to provoke objections to Penzance Heliport. 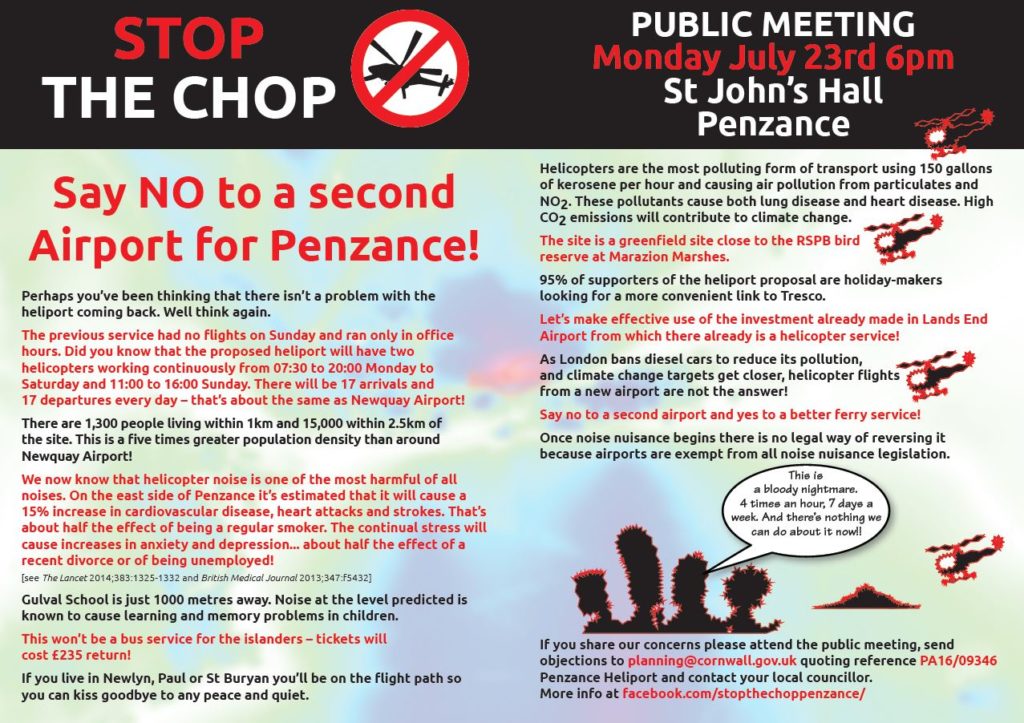 Penzance Heliport is pleased to respond to the claims and provide factual clarification and reassurance to members of the public who may have been unduly concerned by this campaign. You can find our responses to their claims below.

We are keen to engage with the local community, especially with people who have questions or concerns about the project. Stop the Chop’s anonymous, scaremongering campaign helps nobody, and we would encourage anyone with outstanding concerns to contact us via email.

Claim: “Say no to a second airport for Penzance!”

Penzance does not have an airport; Land’s End Airport is around 7 miles away.

Claim: “Perhaps you’ve been thinking there isn’t a problem with the heliport coming back. Think again.”

Public opinion in Penzance has been overwhelmingly positive – 92% of responses at our Penzance public consultation event were supportive or supportive with caveats. Local residents, businesses, Penzance Town Council, Regeneration Partnership, Business Improvement District, Chamber of Commerce, MP, Cornwall Councillors and many others have supported the heliport project, saying it is “critical” to the town’s future.

Claim: “The previous service ran in office hours only. The proposed heliport will have two helicopters working continuously from 0730 – 2000 Monday to Saturday and 1100 – 1600 Sunday.”

Untrue. The previous heliport had no restrictions on operating hours or flight numbers and often operated from 0730 – 1900, with longer hours and up to 23 return flights per day at peak times. The new heliport planning conditions will restrict operating hours and flight numbers to: 0730 – 1900 Monday to Saturday (maximum 17 return flights/day) and 1100 – 1600 Sunday (maximum of 8 return flights). We only envisage reaching these limits during peak season, and only anticipate using two helicopters at peak times to share the workload (not increasing the flight numbers). Compared to the former heliport, this is a 7% increase in peak operating hours (due to Sundays) and a 20% decrease in peak flight movements.

Claim: “17 arrivals and 17 departures every day – about the same as Newquay Airport!”

Untrue. 17 flights per day would be our maximum (only expected to be achieved in peak season), and Sundays would be restricted to a maximum of 8 return flights, so there will not be 17 return flights “every day”. To compare a small heliport serving only the Isles of Scilly to a large regional airport such as Cornwall Airport Newquay (CAN) is misleading. CAN is the UK’s fastest growing airport, serves over 20 destinations, accepts large jets such as the Boeing 737, is a potential site for the UK Spaceport and is home to Aerohub – the UK’s largest planning-free development site. The airport is home to an active RAF base, 24-hour Search and Rescue helicopters, Cornwall Air Ambulance, flight schools, helicopter operators and manufacturers and others.

Claim: “On the east side of Penzance it’s estimated helicopter noise will cause a 15% increase in cardiovascular disease, heart attacks and strokes and increases in anxiety and depression.”

Unproven and misleading. The studies quoted are, at best, inconclusive and have been taken out of context (they principally relate to international and major regional airports, including Heathrow where large jets pass over every 90 seconds and 24 hour operations). The leaflet misleadingly suggests the studies specifically discuss Penzance. Noise emissions from the new helicopters are about half those of the previous helicopters, and a low rotor speed will be used on the ground to minimise noise. Flight paths avoid residential areas as much as possible and the helipad has been lowered and buildings relocated to provide better noise screening to nearby properties.

Claim: “Predicted noise at Gulval School is known to cause learning and memory problems in children.”

Misleading. These claims are from reports that deal with louder noise than will be created by Penzance Heliport. Noise assessments show the heliport will increase background noise by just 0.5dB in school hours, during short periods (changes of around 3dB are imperceptible to the human ear). The contribution from just a single HGV or agricultural vehicle passing along the roads of Gulval could easily produce a similar impact; even an Intercity 125 train passing on the railway line nearly 600m away produces a similar noise level.

Claim: “Newlyn, Paul & St Buryan will be on the flight path so you can kiss goodbye to peace and quiet.”

Untrue. By the time the helicopter overflies Penlee Quarry (not Newlyn village) it will be at altitude and speed, so noise will be faint and transitory (the worst case contribution is expected to be 3.6dB on top of existing noise – only just perceptible to the human ear). The new helicopters are around half as loud as the previous aircraft. Exact flight paths beyond Mounts Bay are yet to be confirmed by the Civil Aviation Authority.

Claim: “This won’t be a bus service for the islanders.”

This will be a reliable, resilient option for islanders and visitors. A Council of the Isles of Scilly study revealed the Penzance helicopter was more popular with island residents than other modes of travel due to its resilience. Greater resilience decreases the wider cost of travel for islanders (less time off work, less mainland accommodation expense, fewer missed appointments etc). The project has received overwhelming support from islanders. We also hope to tender to provide NHS-subsidised medical flights, currently provided by fixed wing.

Claim: “Helicopters are the most polluting form of transport. Pollutants cause lung and heart disease.”

To put Penzance Heliport emissions in context, the maximum daily helicopter movements will emit about the same Nitrogen Dioxide (NO2) as two Intercity 125 trains, or 17 HGV’s or 77 cars, and less Particulate Matter than a single Intercity 125 train. Total annual helicopter movements will contribute 0.0000276 NO2/µg/m3 at the nearest property – about 1.4 million times less than the level at which health effects are detectable, even in the most sensitive members of the population (e.g. asthmatics).

Claim: “The site is a greenfield site close to the RSPB reserve at Marazion Marsh.”

There are no objections from Natural England, RSPB or Cornwall Council’s ecologists; indeed the RSPB has stated they welcome the mitigation measures and wildlife enhancements proposed, including a flight exclusion zone around Marazion Marsh Reserve. Although close to Marazion Marsh, Penzance Heliport is not within any special protection zones. Land’s End Airport (which appears to be favoured by Stop the Chop) sits within the West Penwith Area of Outstanding Natural Beauty and close to a County Wildlife Site, World Heritage Site, Site of Special Scientific Interest, Heritage Coast Zone and Area of Great Landscape Value. The proposed heliport site is predominantly moderate quality agricultural, urban or unclassified land, with a smaller portion of higher quality land which will remain undeveloped. There are three historic landfill sites within 250m.

Claim: “95% of heliport supporters are holiday-makers looking for a more convenient link to Tresco.”

Untrue. We are yet to see any credible evidence to substantiate this claim. Even “studies” by the Isles of Scilly Steamship Group (ISSG) show more planning application comments self-identified as being from Penzance, Cornwall or the Isles of Scilly (33%) than outside Cornwall (8%), and that 10% of Penzance Heliport petition signatories had a Penzance postcode (let alone the rest of Cornwall and the Isles of Scilly). Neither analysis – nor any anecdotal evidence – supports the claim that 95% of supporters are Tresco holidaymakers. We expect two thirds of flights to operate to St Mary’s, serving all five islands, with just one third of flights to Tresco (which will also serve the other islands, particularly in the case of poor visibility at the higher St Mary’s Airport).

Claim: “Make use of the investment in Land’s End Airport from which there is already a helicopter service!”

The ISSG helicopter service from Land’s End Airport is not the service islanders or visitors want. This is demonstrated by the extremely low passenger volumes since its launch (just 21% of available seats up to the end of October 2018 sold at 13th July 2018), despite a severely curtailed schedule. The Land’s End helicopter is only scheduled to operate 4 days per week from the end of October to the beginning of May – the time of year when the claimed resilience benefits of a Land’s End helicopter would be vital to islanders.

Claim: “Say no to a second airport and yes to a better ferry service!”

This does not need to be either/or. As we stated in our Open Letter to the Isles of Scilly Steamship Group in May 2018, if ISSG allow Penzance Heliport to go ahead this will enable them to concentrate on their core passenger and freight shipping and fixed wing air service. Cooperative competition – as existed for decades – is in the best interests of the islands. We repeat our appeal to ISSG to work with us for the good of Scilly.

Claim: “Once noise nuisance begins there is no legal way of reversing it”

We have asked Cornwall Council to include the setup of a Local Stakeholders’ Group as part of the heliport planning permission – we are committed to doing this to allow concerns to be raised and collectively addressed.

Further factual information on Penzance Heliport, including noise and environmental reports, please see www.cornwall.gov.uk/planning (application PA16/09346). Anybody with questions or concerns is welcome to contact us via email.